Markdown has gained much traction due to it’s simple syntax and ease of use. You can edit Markdown in plain text, unlike HTML with it’s taggy surrounds. Hyperlinks to other documents and urls are retained without affecting readability. Other attributes will be color-coded in your text editor. Nowadays, markdown is widely used for project documentation, jupyter notebooks and rendering static webpages (like this one!) on modern web frameworks. It is super useful for vimwiki, a personal text-based wiki plugin for Vim.

This guide will help you get to grips with writing markdown for yourself.

For more ambitious self-publishing projects like an ebook, you can leverage other tools like docbook, asciidoc. Pandoc for example, can reliably convert .md into HTML, pdf, epub, wiki or myriad of other formats.

All you need to get started is a plain text editor such as Notepad++, Atom, SublimeText or Vim. You don’t want to use a word processor, that would add extraneous characters.

…and so on down the line to ###### which produces the smallest header a.k.a. H6. Now that we’re on the subject, a links’ text is delimited by square brackets immediately followed by parentheses enclosing the url that the link points to.

Not that you want to go before my fascinating tutorial is over! To provide a link lower down on the page, the following will do the trick.

Take me to the Coloured Code

Much More Than Meets The Eye: Most HTML is obscured from the reader, and also to a lesser extent the markdown that underlies this page. Javascript and other platform-specific components can add functionality to otherwise static webpages.

The following can be written in HTML or markdown as we have seen. It’s both an anchor and a header.

Markdown treats asterisks (*) and underscores (_) as indicators of emphasis. Text wrapped with one * or _ is the equivalent of using HTML <em> tag. Double them up and text will be wrapped with an HTML <strong> tag like so:

Unordered lists can use asterisks or pluses or hyphens interchangably as list markers when followed by a space:

Ordered lists use numbers followed by periods followed by a space and the list item. the actual numbers you use to mark the list have no effect on the HTML output. you could even jumble up the numbers and it would still produce an ordered list:

List items may consist of multiple paragraphs. Paragraphs can be neatly wrapped with hanging indents of 4 spaces. Or your notes can be as messy as mine. Order will be available when the markdown has been interpereted.If subsequent paragraphs in a list item are indented by either 4 spaces (or one tab) they will be included in the bulleted paragraph:

To put a blockquote within a list item, the blockquote’s > delimiters need to be indented:

I enabled emojis in my [hugo] config file with enableEmoji = true. I present japanese_ogre.

To highlight a single code command surrounded by ordinary text, wrap it with backtick quotes (`). Unlike a pre-formatted code block, a code span indicates code within a normal paragraph. It will be shown in the ‘mono’ font of the terminal: Delimiters need to be indented:

Use the printf() function.

This snippet of HTML code is an anchor or an embedded id and a H3 header. A TOC, or table of contents, uses internal page links. It could also be written in markdown, same difference! (The HTML tags get added when the page is run through a processor):

Nowadays there is support for code highlighting for about 160 programming languages. this example is written in bash, the commandline language of the linux shell. In addition to the three backticks you can add an abbreviation such as md (markdown) or sh (to highlight code written in bash). I’ll show the backticks that are required to create a code box (they are just for illustration and have to be escaped by \ so as not to be interpreted as ‘special characters’).

The ‘Emphasis’ header/anchor was created using a HTML snippet, but we can also get around using markdown:

back up to where I was

To insert images to your markdown file, use the markup ![alt](/path/image.ext). the path can either be relative to the website, or a full url for an external image. Below is a screenshot of my current desktop. 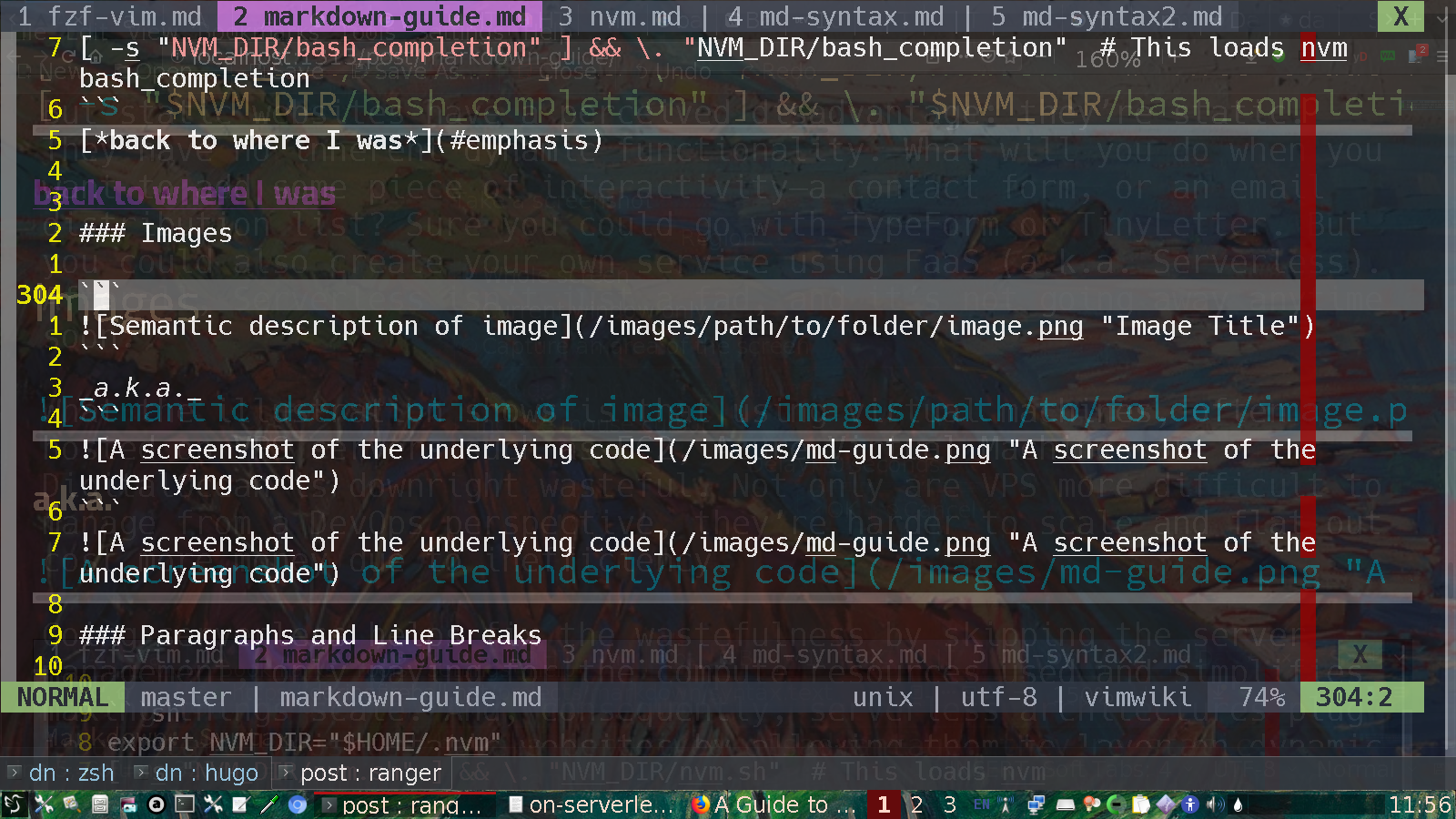 Cool Tip: Set your program windows to 70% transparency in linux. The top layer shows my text editor, neovim, underneath is the HTML translation in firefox. On the bottom layer, a random slide-show of hand-picked artwork.

There are a couple of ways to share a video. I can use a shortcode provided in the [Hugo] static site generator. Plain markdown results in a link to the video, but with HTML5 tags we can embed this video of the author making fruit leather with a homemade solar dehydrator.:

A paragraph is simply one or more consecutive lines of text, separated by one or more blank lines. Normal paragraphs should not be indented with spaces or tabs.

If you want to be sure of getting empty lines between elements, insert a <br /> break tag to be certain of making blank lines.

If you want to format text on a particular way on the page, one way to do it is create a table with those proportions (your table will span the width of the page). Set the border of the table to 0px in your CSS and the table edges will not be visible, but the text will.

Markdown uses email-style > characters for blockquoting. Blockquotes can contain other Markdown elements, including headers, lists, and code blocks. Put > before the first line of a hard-wrapped paragraph:

Sorrow prepares you for joy. It violently sweeps everything out of your house, so that new joy can find space to enter. It shakes the yellow leaves from the bough of your heart, so that fresh, green leaves can grow in their place. It pulls up the rotten roots, so that new roots hidden beneath have room to grow. Whatever sorrow shakes from your heart, far better things will take their place.
~Rumi

Pre-formatted code blocks are used for writing about programming and source code. Rather than forming normal paragraphs, the lines are wrapped in <pre> and <code> HTML tags to be interpreted literally. To get the result, indent every line of the block by at least 4 spaces or 1 tab.

A code block continues until it reaches a line that is not indented (or the end of the article). To put a code block in a list, the code block needs to be indented twice – 8 spaces or two tabs.

Regular markdown syntax is not processed within code blocks. e.g., asterisks are just literal asterisks within a code block. This means it’s also easy to use markdown to write about markdown’s own syntax. Outside of code blocks you can use backslash escapes to generate literal characters which would otherwise have special meaning in Markdown’s formatting syntax. For example, if you wanted to surround a word with literal asterisks (instead of an HTML tag), you can use backslashes before the asterisks, like this:

Escape the following character with backslashes when you want to be sure they’re interpereted literally:

Lines across the page with either of:

This guide is also available on Github